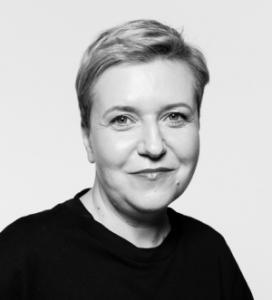 Journalist with twenty years of experience in Polish and international media (Newsweek, Forbes, TVN24, Polsat, TRK Ukraine, CNN and CNN Radio). Currently Editor-in-Chief of Forbes Women Poland. Previously Editor-in-Chief newsweek.pl and forbes.pl. She was working as a news producer in TVN24 and was managing information department in largest polish tv station, Polsat. She began her career as a student and became a journalist at Radio Free Europe and Radio Zet. She teaches journalism at Digital Media Campus. She hosts weekly Forbes Women podcast. For many years, she has been supporting organizations working for equality and women's rights.

Currently Editor-in-Chief of Forbes Women magazine.  She is an expert on legacy and online media. She teaches journalism at Digital Media Campus. She hosts Forbes Women podcast. As a feminist she has been supporting organizations working for equality and women's rights.

Alexandra tells the story of the famous women's revolt in the Newsweek 1970 in relation to her own experience as a journalist in polish Newsweek, to show story of equality, women's rights and why women's solidarity is still so important.

In the 1970s, Newsweek was one of the most important media the world. It was a working environment much like from "Mad Man" series. Sexism, discrimination, and harassment were embedded in its culture. Female graduates from top American universities worked there, but the bosses had one rule: "Women don't write." They could only brew coffee, sort letters, and do research for men. The sexism was rampant to the point that the female employees sued the company for gender discrimination. It was the first such lawsuit in the US. Within three years Newsweek's women changed the company's sexist rule. They succeeded thanks to solidarity, great organization, relying on the law and finding allies. They changed the world for the better, not just for themselves, but for all women in the world, including me- said Alexandra at TEDxAcademyHighSchoolWomen

Equal Voice - the voice of women in the media

Media have a great influence on how people perceive the world. The language they use is a tool that shapes social norms. However, according to research, far fewer women than men appear in the media. What is the reason for this? Why is half of society not equally represented in public debate? Can algorithms exacerbate stereotypes? How to rectify the situation, what are global examples of good practice? How to become a well-known expert and own your voice?  Aleksandra discusses these topics based on global media research, as well as on her 20 years of practice as a journalist and manager in polish and international media.

The Tree of Understanding. Media: language and bias

Language is a powerful tool, that shapes social norms. Quoting polish female Nobel laureate Wislawa Szymborska, Aleksandra unravels the bias and double standards rooted in language. What image of women media create and what can we do about it? How using feminatives can support equality?  Why is the younger generation demanding gender-neutral language? How should we speak and act to adhere to the principles of diversity and inclusivity.

In four steps Aleksandra shows the biases and double standards ingrained in language. Does the media treat men and women equally?  What are the consequences of the lack of female role-models. In her speech Aleksandra also invokes the words of Marian Wright Edelman "You can't be what you can't see." She explains why without role-models it is difficult for young women to aspire to careers in STEM.

In her speech Alexandra discusses the words of Nobel Prize winner and poet Wislawa Szymborska about the Tree of Understanding. How double standards work in language, especially in relation to successful women, who are often described as "cold," "aggressive" "arrogant," or " hysterical." Alexandra shows some examples regarding female leaders such as German Chancellor Angela Merkel or British IT pioneer, businesswoman Stephanie Shirley, who both faced discrimination and belittlement in their careers. What is changing today and how equality in language and media can be restored?  Alexandra shows how technology can serve equality with examples of algorithms such as Equal Voice.

How big technology platforms have changed the media market, democracy and what can be done about it.  Citing the voice of prominent women and experts (Carole Cadwalladr, Alexandria Ocassio-Cortes and Margerethe Vestager), Aleksandra tells why we are facing media crisis, the decline in public trust in journalists, and how this affects elections and democracy. Why often the lines between information, fiction, entertainment, and advertising are blurred. What could be done to ensure that citizens have access to reliable information in a digital world?

What is work-life balance and where does work-life conflict come from? What priorities and values does the culture instill in

us, since 65% of Poles work on weekends and holidays and 55% say they still work when they are sick. What are the consequences of the imbalance? What is professional burnout and how can we cope with it. Aleksandra talks about the subject quoting research and books by Brene Brown, Simon Sinek, Nigel Mrsh and Jake Knapp and John Zeratsky.

Editor-in-chief of Forbes Women Poland. Expert in legacy and digital media. Feminist promoting women empowerment. Advocate of womenomics: economics from a female perspective. She teaches at the Digital Media Campus of SWPS. She hosts a weekly podcast Forbes Women.